Economic slowdowns hit even the wealthy, and this latest one has dealt a serious blow to markets in places such as Aspen, Vail and Telluride, where home prices often are measured in millions of dollars.

Last year was a year to remember, or possibly better off to forget, as transactions and dollar volumes in many resort areas continued a sharp decline also experienced in 2008.

“Even people who are affluent may say, ‘Well, I’m down to my last $15 million or $10 million or half million, so I’m going to cut back,’ ” Aspen Mayor Mick Ireland said earlier this year.

Said Aspen real estate broker Greg Hunter, “I think everybody was affected by the downturn in the U.S. economy. The rich people are still rich. They’re just less rich. It certainly affects their mindset and their investment in real estate as a place to park their cash, park their money.”

Now, the wealthy are helping lead resort markets back from a dismal 2009. But generally it’s because they see an opportunity to buy for less than during the market peaks of 2007 or so, and they expect sellers to be willing to drop prices.

“These buyers are very sophisticated. There’s a reason they have this kind of money,” said Jon Wade, a real estate agent in Steamboat Springs.

Hunter said that although higher-end sales in the Aspen area have been fairly strong, the market midvalley in places like Carbondale and Basalt has yet to respond.

Aspen prices have come down probably one-third from their peak as buying has picked up.

“That’s probably a fair place for them to be. I think prices just got out of control for a while,” Hunter said.

But he believes midvalley prices may have to fall as much as 50 percent from peak levels to attract buyers. Unlike second-home owners who are common in Aspen, people in places such as Carbondale tend to work locally and are more affected by the economy, which impacts prices, he said.

Another challenge for sellers of midrange properties is buyers are less frequently able to buy with cash the way some luxury home purchasers do. And with today’s tighter credit market, it can be hard to obtain loans of several hundred thousand dollars to be able to meet asking prices.

Eric Auer has been experiencing the challenges of selling in today’s market. He and his wife live less than 10 miles downvalley from Aspen in Aspen Village, a mixture of stick-built, modular and trailer homes. They first put their home up for sale two years ago for close to $1 million, hoping to cash in on the then-higher resort-property prices and move somewhere cheaper.

It didn’t sell, and this spring they put it back on the market for $775,000. They later dropped the price to $750,000, before giving up for the time being and pulling the house off the market in hopes the market will improve later.

“The market hasn’t turned around to get someone to buy it, I think,” Auer said.

It would have been nice to sell, but for now, “We’re stuck here in paradise,” he said. “I’m OK if we just stay here for a while anyway.”

Hunter said he thinks the best policy for property owners in places such as Basalt and Carbondale is “to wait and hope things get better” if they can, particularly if they bought during the market peak and could otherwise be looking at a 50 percent loss on their investment.

Ed Foran, broker associate at Mason Morse in Aspen and past president of the Aspen Board of Realtors, said it has been hard to watch friends who worked in hard-hit construction and related industries face the possible sale of their midvalley homes at half-price after buying them during the market peak.

“From what I understand there is a wave of foreclosures coming to the midvalley,” he said.

Even with the lingering effects of the recession on resort markets, Hunter said things have improved a lot since last year, when people were so worried about the nation’s real estate woes that they weren’t buying at any price.

Despite poor overall 2009 results in resort towns, sales later in the year actually began to show improvement over the same months in 2008, even if they still paled in comparison to the real estate boom of previous years.

Ireland, the Aspen mayor, welcomes the signs of recovery in the local real estate market. But there is less speculative investing than during the time of market excesses, he said.

“The market was unrealistic, and people were paying more than the market returns justified. But they were doing that for all kinds of markets,” Ireland said.

“There are lots of international buyers that want to own property here. The prices that we have seen recently have let a lot of people back into our market that weren’t able to buy here a couple of years ago,” Hunter said.

Foran said certain niches of the Aspen-area market, such as the city’s popular west end, have experienced strong sales.

“I think with the price reductions we’re seeing going on, we’ll see a continued resurgence of people with money recognizing it’s a great time to buy in Aspen,” he said.

He doesn’t expect the Aspen market to come roaring back the way it has from other recent slowdowns, but instead thinks it may recover at a pace resulting in more sustainable growth in the community.

Park City, Utah, real estate agent Dennis Hanlon is president and founder of the Western Mountain Resort Alliance, made up of real estate boards from numerous resort areas. He said the general consensus he hears is transactions are picking up, but not prices. Investors are looking to take advantage of the buying opportunities the recession created, but sellers are having to be competitive in their pricing, he said. Prospective purchasers of high-end properties are shopping because they can get bargains right now, he said.

“The high-end prices are not what they were two years ago,” he said.

In Steamboat Springs, Wade saw a case earlier this year of a seller who agreed on a $2.85 million price. “They turned down a $4.25 million offer a little over a year (earlier),” he said.

Real estate agents are hesitant to predict whether resort prices have bottomed out and the markets have turned the corner toward a recovery. Concerns about a possible “double-dip” recession make the future harder to forecast, including in resort markets that have shown themselves to be plenty susceptible to national economic trends.

Hanlon said the consensus he hears is “that we’re probably at the bottom and just bouncing around. We’re going to bounce around at this level for a while, but with interest rates where they are right now and plenty of inventory, it’s a fabulous time to be a buyer.” 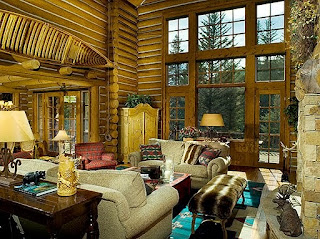 Privately situated in a gated community and on the rushing waters of Gore Creek, this authentic log home has 5 bedrooms and an attached caretakers apartment. An open great room for entertaining makes this true Colorado home a joy to visit. Great use of space and the location of this home are truly irreplaceable. Ski in/out from the Cascade lift.

Posted by Betsy Laughlin at 11:47 AM No comments:

Why I live in Colorado 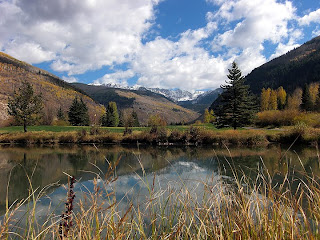 Autumn in Vail is my favorite time of year. The foliage is spectacular and their is snow on the mountian peaks. Who could ask for a better photo?
Posted by Betsy Laughlin at 12:53 PM No comments: