The end of ski season 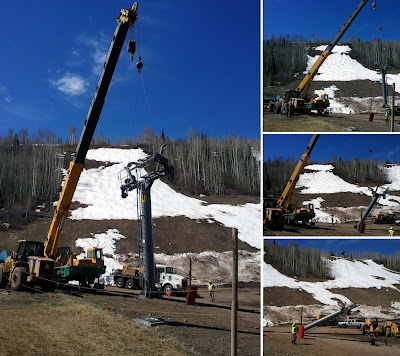 Another ski season has come and gone and the Vista Bahn ski lift is being retired. It will be replaced by a new high speed gondola and construction at the base of Vail Mountain is underway. The Vista Bahn is not being relocated but recycled and reused for spare parts. The new gondola will have the number “1” to commemorate Vail’s original gondola in that location. The cabins will be designed to carry 10 passengers and each will feature heated, cushioned seats and Wi-Fi access for guests. With a speed of 1,200 feet per minute, the gondola will be the fastest gondola of its type in the world, creating a 40 percent increase in uphill capacity and decrease the ride time to Mid-Vail.

From the Wall Street Journal


Auto sales. Consumer confidence. Manufacturing. Retail Sales. Exports. You name it. Over the last six months, nearly every facet of the U.S. economy has shown improvement. And the real estate market is no exception.

Recovery Sign #2: Building Permits. In February, building permits – a proxy for future construction – climbed to an annual rate of 717,000 units. That was ahead of expectations. It also represents the highest level since October 2008.

Recovery Sign #3: Dwindling Inventory. Expect even more building on the horizon. Why? Because new home inventories plumbed their lowest level on record in January at 150,000 units.

Recovery Sign #5: A Bottom in New Home Sales. Last year, new home sales fell to 302,000 units – the worst reading on record. For comparison’s sake, in 2005, 1.28 million new homes were sold. The market has likely bottomed out. I say that because new home sales in February checked-in at an annual rate of 313,000 units, which is 11.4% higher than last February’s rate.

Recovery Sign #6: A Rebound in Existing Home Sales. In the last year, demand for previously owned homes ticked 8.8% higher to an annual rate of 4.59 million. And the number of contracts to buy existing homes in February jumped even more – up 14% year-over-year.

Recovery Sign #7: Prices. As I’ve written before, prices will be the last sign of a recovery. They’re a lagging indicator, like unemployment. That being said, signs of a price rebound are materializing. Based on the latest Case-Shiller Indexes, prices in Miami and Phoenix – arguably two of the hardest-hit real estate markets – were up in January by 1.2% and 2%, respectively. That marks the third consecutive month of improving prices in Miami and the fourth in Phoenix.

Individual builders aren’t hiding their optimism, either. The CEO of the nation’s third-largest homebuilder recently said, “A very real trend is beginning to take shape… There are empirical data points that are today confirming that the market is showing real signs of stability.” Indeed!

Recovery Sign #9: Historic Affordability. With prices down an average of 36% from the peak – and rent prices rising – it’s never been cheaper to buy a home. In fact, the National Association of Realtors Housing Affordability Index hit a record high of 206.1 in January. (A value of 100 means a family earning the national median income can afford a median-priced property at current mortgage rates.)

A separate study by Trulia found it’s now less expensive to buy than rent in 98 of America’s 100 most populous metropolitan areas. (Honolulu and San Francisco were the lone exceptions.)

And yet another study found that the affordability gap is widening, strongly in favor of buying. Deutsche Bank reports that the average rent is now 14.9% more than the average home loan payment – up from 8.1% in the previous quarter.

Recovery Sign #10: Employment. It’s hard to buy a house if you don’t have a job. And no one can deny that the labor market is improving. In the last eight months, the unemployment rate is down almost one full percentage point.

Recovery Sign #11: An Influx of “Smart Money.” Greg Zuckerman of The Wall Street Journal reports, “Over the last couple months some of the best investors on the street… have been making big bets on homebuilders.” And he’s not kidding.

The list reads like a “Who’s Who” on Wall Street. It includes SAC Capital, Blackstone, Caxton Associates, Cerberus, Canyon Partners and CQS U.K.