Posted by Betsy Laughlin at 4:39 PM No comments:

Eagle County real estate numbers conclude 2012 with December reflecting the best month of the year. December had approximately $225 million in sales volume, which is nearly double that of last December. December also had 208 transactions. These numbers push the year end dollar volume for the county to over $1.5 billion and 1,726 transactions. Overall, 2012 is the best real estate year since 2008. Sales under $500,000 carried the vast majority of the transactions with 838; 58% of the residential transactions. Two other spectrum's also played a major roll in 2012; banks sales and high end properties over $4 million.

The Snow is GREAT IN VAIL! 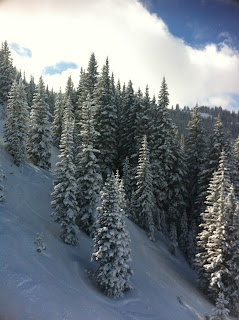 January ended with a bang as Vail Mountain was blessed with another nine inches of fresh powder snow since Wednesday morning and at least another inch since the official report today, bringing the week’s cumulative total to two feet with more snow still falling throughout the valley.

We are enjoying the fresh powder and hope Mother Nature continues to snow on us! Come join me on the slopes!
Posted by Betsy Laughlin at 11:37 AM No comments: