Vacation Homes: Why It May Be Time to Buy

By JESSICA SILVER-GREENBERG, Wall Street Journal, 7/23/2011
The clouds hanging over upscale vacation-home markets are starting to lift. While prices are still falling in most regions, the luxury segment is picking up, and brokers are reporting more inquiries than they have had in years.

The upshot: If you have the money and plan on staying put for the long term, now may be a good time to buy.

Five years after housing's peak, markets that once were out of sight even for well-heeled buyers are now in range. On Hilton Head Island, S.C., a three-bedroom home nestled between the Atlantic Ocean and Calibogue Sound changed hands in April for $750,000, after having sold for $1.2 million in June 2006. In Vail, Colo., a three-bedroom home that fetched $3.3 million in 2008 sold in February for $2.5 million.

Overall, the median second-home price was $150,000 in 2010, down 11% from 2009 and roughly 25% from 2006, according to the National Association of Realtors. That isn't pretty, but it is only slightly worse than the 22% drop for the overall housing market. The higher end of the market—homes in the $5 million-plus range—has held up better, says Douglas Duncan, chief economist at Fannie Mae. "At the top of the market, particularly luxury homes, prices have proven very elastic, and have sprung upward quickly," he says.

Buyers are taking heed. On Palm Beach Island, Fla., sales were up 50% in the year ending June 30. Transactions in the Hamptons, on New York's Long Island, jumped 59% in the second quarter from a year earlier. In Aspen, Colo., sales for the year ending May 31 were up 10%.

The number of people looking at properties is up as well: In Vail, Hilton Head and Palm Beach, foot traffic has jumped by at least 30% this year, according to local real-estate agents. "People have frugality fatigue," says John Burns, president of John Burns Real Estate Consulting Inc. in Irvine, Calif.

This isn't to suggest the boom is back. In general, properties situated in prime locations—on the water or near a ski slope—are selling well, but homes in less desirable spots are languishing on the market. Banks are increasingly wary of making second-home mortgages, particularly "jumbo" loans above federally guaranteed limits; 10% of banks raised their standards on such loans last year, according to the Federal Reserve. And the tax deduction for mortgage interest on second homes is at risk of being cut back.

Geography is the best guide to today's vacation markets: In some places prices are holding up, while in others they are still tanking.

The blue-chip market consists of a handful of spots where prices have stabilized and could soon rebound as sales pick up. Some, such as Hilton Head, have benefitted from tough restrictions on building, which kept inventories manageable during the bust. Prices there have risen by 4% during the past year.

The other market is still very much in crash mode. In places like Miami, Fla. and even Martha's Vineyard, Mass., prices have continued to drop as foreclosed properties flood the market. But bargains abound as sellers cut their asking prices or accept less to unload properties. In March, for example, a three-bedroom home on Palm Beach Island, Fla., listed for $4.6 million sold for just $2.5 million.

With the broader housing market still so sick, it might seem the height of folly to jump into such unpredictable investments now. Even in blue-chip markets there isn't a guarantee of price appreciation anytime soon. Indeed, over time vacation-home markets don't do noticeably better than primary-home markets. Homes on Martha's Vineyard appreciated by 40.9% over the past 10 years, edging out Boston's 40.5%. But Hilton Head's 15% gain was trounced by nearby Charleston, S.C.'s 25.4% rise.

Then again, most vacation-home buyers aren't looking to make big investment profits. More than 80% of second-home buyers surveyed by the National Association of Realtors in May reported that they bought for consumption reasons—to live in the house and enjoy it.

And many second-home buyers are wealthy enough to pay in cash, sidestepping the restrictive and time-consuming mortgage process. Last year, 36% of vacation-home transactions were all-cash deals, up from 29% in 2009, according to the National Association of Realtors. "If you have cash right now, you are in unique position," says Paul Dales, senior U.S economist with research firm Capital Economics.
Posted by Betsy Laughlin at 5:44 PM No comments:

This valley has one of the nation's longest life expectancies
by, Randy Wyrick
Vail Daily, 7/26/2011

In Eagle County, we live longer and we live better than almost anyone else in the United States.

That's longer than almost any place else in the country, and almost as long as anywhere on earth, according to a study from the University of Washington.

“We live a long time because of our healthy behaviors. It prevents chronic diseases and death from things like lung cancer that results from smoking and obesity that results from eating too much, eating badly and never exercising,” says Rebecca Larson, who handles public health for Eagle County's Health and Human Services department.

And we seem to be getting healthier faster than almost anyone else, the study found.

The rates of improvement for Eagle County men are the best in Colorado.

Only 14 percent use tobacco, compared to 19 percent statewide.

Only 13 percent are obese, compared to 19 percent statewide, and Colorado has the lowest obesity rate in the nation.

Thirty five percent of Eagle County adults report that they get their five servings of fruits and veggies per day, compared to 25 percent statewide.

Because we have a low obesity and smoking rate, we have low incidence of heart disease and diabetes, the kind of stuff that can lead to an early grave.

“We're getting outside, getting some exercise, eating fruits and vegetables. That affects our low obesity rate,” Larson says. “I wasn't surprised for our county. We're focused on recreation. There has been an effort to promote healthy eating and a healthy lifestyle, and I think that will continue.”

The University of Washington study looked at more than 3,000 counties across the United States. Eagle County ranked 27th in life expectancy in the nation. Eagle County men ranked 37th.

The only Colorado counties higher were Larimer for men, Summit for men, Pitkin and Douglas and Gunnison counties for both men and women.

Between 1987-2007, Eagle County's life expectancy improved 6.3 years, more than almost anyone in the country.

Only 11.6 percent of Eagle County people are considered inactive.

“It's the opportunities we have to be active,” said Jamie Gunion, marketing director with the Vail Recreation District.

It's a lifetime range of activities, Gunion said.

“So much of what we do is based on the great outdoors and everything we have to enjoy here in the valley,” she said. “We have golf courses, there's the mountain bike series, trail running series; the day camps are designed to help young people be active.”

People in Japan, Canada, and other nations are enjoying significant gains in life expectancy every year, most counties within the United States are falling behind, according to the Institute for Health Metrics and Evaluation (IHME) at the University of Washington.

Researchers found that between 2000 and 2007, more than 80 percent of U.S. counties fell, compared to the average of the 10 nations with the best life expectancies in the world.

“We are finally able to answer the question of how the U.S. fares in comparison to its peers globally,” said Dr. Christopher Murray, IHME Director and one of the paper's co-authors. “Despite the fact that the U.S. spends more per capita than any other nation on health, eight out of every 10 counties are not keeping pace in terms of health outcomes. That's a staggering statistic.”

The researchers suggest that the relatively low life expectancies in the U.S. cannot be explained by the size of the nation, racial diversity, or economics. Instead, the authors point to high rates of obesity, tobacco use, and other preventable risk factors for an early death as the leading drivers of the gap between the U.S. and other nations.

Women live the longest in Collier, Fla., at 86 years on average, better than France, Switzerland and Spain. Men live the longest in Fairfax County, VA, at 81.1 years, which is higher than life expectancies in Japan and Australia. Women are also living long lives in Teton, Wyo.; San Mateo and Marin, Calif.; and Montgomery, Md. For men, long life spans also can be found in Marin, Calif.; Montgomery, Md.; Santa Clara, Calif.; and Douglas, Colo.
Posted by Betsy Laughlin at 5:38 PM No comments:

Events in the High Country

Vail Soul Music Festival, August 19 - 20, 2011
Experience The Love of Soul
Treat yourself to a healthy dose of all things Soul. Vail Soul Music Fest celebrates the heart of Soul Music with top musicians, empowerment events and cultural activities over three days and two nights of performances by some of the greatest Rhythm & Blues (R&B), conscious Hip Hop, alternative Rock, Blues & Neo Soul artists from around the world.

This years artist line-up is an impressive collection of amazing talent which includes Grammy nominees and returning favorites from last year's inaugural fest.

Click on the photo below to view in a larger format! 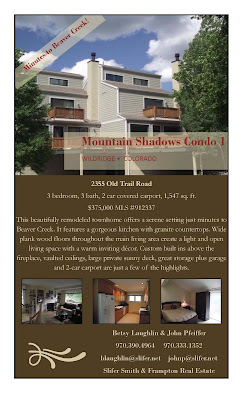 Posted by Betsy Laughlin at 8:21 AM No comments:

Slifer Smith & Frampton Real Estate (SSFRE) has been named the 65 largest real estate company in the country based on sales volume in the REAL Trends Top 500 Report recognizing the nation’s highest-producing real estate companies. The company produced 1,309 transaction “sides” representing sales volume of $1,371,868,349 in 2010 to qualify for this prestigious list of the country’s top 500 real estate firms. SSFRE has 24 offices and over 140 brokers covering the Vail Valley and Summit County.

SSFRE was also recognized as the number two firm in the country based on Firms Ranked by Sales Volume Per Broker.

In addition, the firm’s global network, Leading Real Estate Companies of the World®, once again was named the highest-producing network in terms of total sales for 2010 among this elite top 500 group of companies.

The power of local branding was further emphasized with #1 market share rankings for the nation’s top 96 markets. In that portion of the study, LeadingRE members ranked first in the market in 40% of the cities, compared to 24% and 11% for the next two networks.

The Top 500 report was released recently at the REAL Trends “Gathering of Eagles” annual conference. This third-party survey is widely recognized as the leading study of its kind.

“We take great pride in these results,” comments Jim Flaum, President and Managing Broker, “particularly given the challenges of today’s economy. These numbers demonstrate that savvy consumers are recognizing the opportunities that exist in the resort market today due to incredible values and the lowest interest rates we’ve seen in many years, and our brokers are performing at very high levels to meet the needs of these clients.”

The affiliates of Leading Real Estate Companies of the World® produced total 2010 sales of 800,000 valued at $225 billion.

Slifer Smith & Frampton Real Estate has been the most trusted name in Colorado mountain real estate since 1962.
Posted by Betsy Laughlin at 8:00 AM No comments: